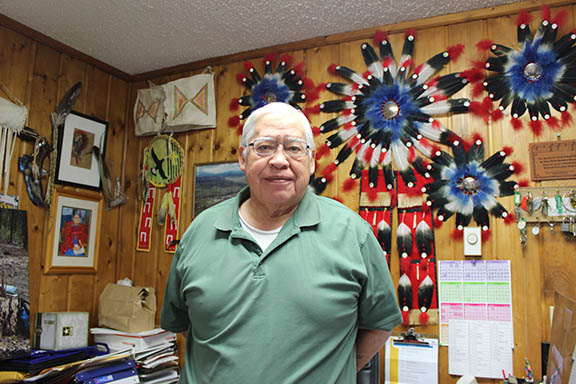 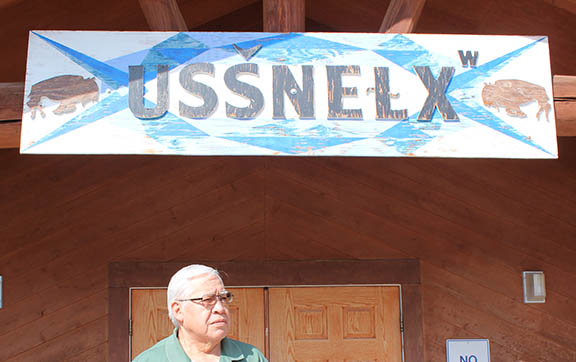 Tony Incashola, a Confederated Salish and Kootenai (CSKT) Tribal Elder, has been serving the Salish-Pend d’Oreille Culture Committee for 39 years. His service began with a call from another visionary named Johnny Arlee, who asked if Tony wanted to work with him on preserving the Salish culture. Tony had the background for it.  He has always lived a traditional way of life, growing up with his grandparents learning the language and customs.  Later, he eventually went on to serve in the U.S. military and soon after returned to the Flathead Reservation.

Tony was born on a cold fall day in Saint Ignatius, Montana. He was the youngest of five boys born to his mother Mary Louis Beaverhead-Incashola. Shortly after Tony was born his mother passed away and Tony and his brothers were sent to live with their grandparents. Living with his grandparents, Tony was able to learn his language and cultural customs. His fondest memories from childhood were of camping all summer in the Mission Mountains; hunting, fishing, and gathering roots and berries. In the evenings other camping families would play stickgame (see previous article about stickgame) and they would bet money or berries, with winners taking all. Come fall, after the family gathered the necessary meat, berries, and roots for the winter, he would return to school. From a very young age Tony recalls the racism he faced, on his own reservation, for being Native American. He turned the pain of racism into a lifelong pursuit to preserve Salish culture and give future generations a sense of pride in who they are as a people.

At the age of 19, Tony followed in the footsteps of his older brother and joined the U.S. Army. He was shipped to Fort Hood, Texas, for basic training and then sent to Fort Lewis, Washington, for advanced training. From Tacoma, Washington, Tony was then sent to battle in Vietnam. Tony recalls sailing out of Tacoma and thinking how calm the waters of the Puget Sound were, but once the ship reached the Pacific Ocean it became rough. Tony was sick for the next 18 days until he arrived in Vietnam. He was stationed in North Vietnam in Pai Keu while his brother was stationed in Saigon. After accumulating enough leave to go back home, Tony decided to donate his leave to his brother, since he had been fighting in Vietnam long before Tony arrived. It was at this time that he received the news that his brother had been killed in action. Tony escorted his brother back to the Flathead Reservation to be laid to rest with his people.

After serving his time in Vietnam, Tony went on to Fort Sill, Oklahoma, to become an instructor in artillery but was shortly thereafter discharged from the U.S. Army. Tony then met his wife, Denise Brown, in Oklahoma and they moved back to Saint Ignatius to start a family. He began working construction to provide for his family. In 1975, he received a call from Johnny Arlee, another CSKT Tribal Elder, asking him to help with a project to preserve Salish culture and language. Johnny and Tony began speaking with other Elders and they expressed their fear of the Salish language and culture being lost. They started the Salish-Pend d’Oreille Culture Committee (SPCC) to help preserve the language and culture.

Johnny and Tony began gathering as much information, stories, and songs as they could. This started with gaining the trust of many of the other Elders and encouraging them to share their tribal knowledge so that they could preserve their Salish-Pend d’Oreille culture. As technology advanced, so did the SPCC. They have produced over 1200 audio interviews, 100 movies, lessons, presentations, and other footage of elders. The archives that the SPCC has produced is one of the most comprehensive and extensive tribal collections in the nation.

The SPCC has also been putting their efforts into making a multi-volume book set about tribal history and culture. What makes this unique is it’s written by tribal members with a tribal perspective. The majority of literature about the Salish and Kootenai was written by non-Tribal scholars, but having tribal perspective adds value as a firsthand account. The cultural book set will be written in both English and Salish, concurrently, throughout the pages. The set will also feature many photos obtained from the National Archives of the Salish-Pend d’Oreille, many of which hang in the S&K Offices throughout the country and in our Saudi office. While the cultural book set is being comprised, the SPCC is working on other publications regarding specific topics such as place names and the Swan Valley Massacre of 1908. Visitors to the Flathead Reservation find the roadside signs and place names are written in English, Salish, and Kootenai.