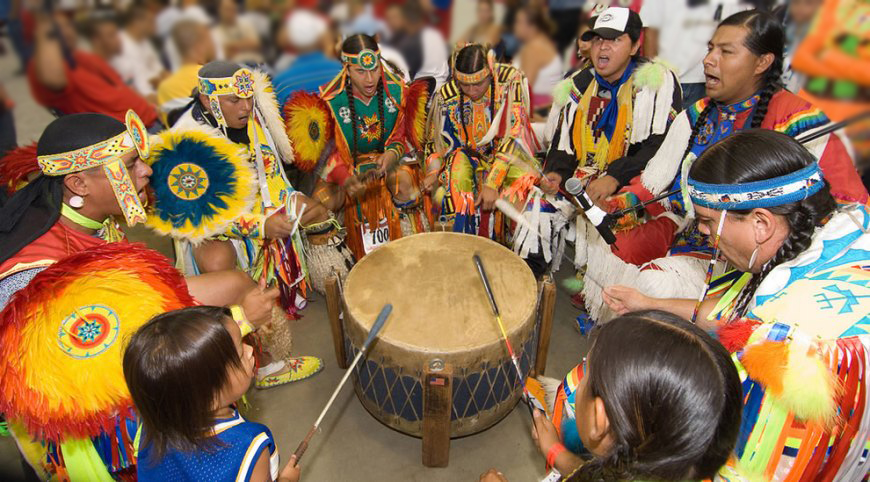 Many North American tribes view the drum as the center of each family or community. Some tribes even view the drum as its own individual entity or soul. The beats of the drum are thought to carry prayers up toward The Creator. The drum has been a significant part of ceremonial and inter-tribal gatherings for thousands of generations. 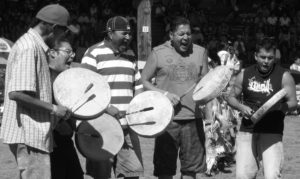 A great deal of time is spent making each drum, large and small. Drums are usually made with circular wooden frames which represent the various cycles whether it be life, seasons, or the Sun. The drumbeat is thought to represent the heartbeat of Mother Earth. As people on a circular plane, we are all connected through songs and the drum.

The outer part of the drum is made of hide from either wild game animals or cow. Respect is given to each animal that gave its life to the people. The uniqueness of each hide is incorporated into the story and soul of each drum. Once the hide is skinned it is soaked in water for 24 hours. After the hide is soaked, it is then stretched out on a frame and the hair is removed. Traditionally, blades or bones were used to scrape the hide to remove the hair. The hides are stretched again and cut to fit each drum. Thinner hides would be used for smaller hand drums and thicker hides used for larger drums.

Smaller drums, or hand drums, are used for singular use. Although hand drums are for individual use, groups of people with hand drums can come together and sing one song. This usually happens during stick games, where one team will sing a song using all hand drums or rattles. Group singing with hand drums is also common in round dances, where various singers come together to sing. Round dances are communal events that bring people together for prayer or fun. Round dance songs are not typical “powwow” type songs. They incorporate messages of love, healing, pain, and enjoyment; and sometimes incorporate English phrases into the songs, like the sample songs on the right.

Larger drums are used primarily for powwows or large community gatherings. These larger drums carry a larger bass to them and can be heard miles away, often echoing through valleys. Naming of the drum groups usually depends on the area they represent. Some larger groups might represent many tribal nations.

The songs produced on the larger drum are honor songs, powwow songs, flag songs, veteran songs, and inter-tribal songs. These types of songs throughout Indian country are very diverse. Northern drums often sing at a higher octave falsetto. Southern drums will often sing a lower-toned song. Larger powwows sometimes separate the northern and southern drums in competition due to their diversity. Drums that compete in competitions are usually the most synchronized because they drum at the same pace. 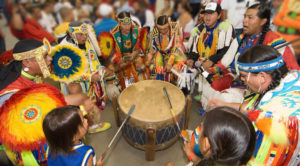 Some tribes in the eastern part of the United States have water drums and gourd drums. These ceremonial and communal drums contain water in the drum, which when shaken, gives the drum different sounds throughout the duration of the ceremony or powwow. Following the shaking of the water in the drum, a water song is sung. Cords and rattles are usually incorporated into the drumming which gives it a distinctly different sound from all other North American drums.

The drum is the most distinct instrument for many tribes throughout North America. The diversity of the First Nations yields many different beliefs about the drum and its use. The majority of drummers in Indian Country are male, but depending on the area, some drum groups are mixed or are all-female drum groups. Although Indian Country is diverse, the drum and its songs are a unifying factor that brings all people together, Indian and non-Indian.