Buffalo – the sacred, the honorable

The Salish, Kootenai, and all tribes of the U.S. plains and surrounding areas were dependent on the hunting of buffalo. The buffalo provided many resources; such as food, shelter, clothing, tools, and ceremonial sacrament. The buffalo were respected by the tribes and thanks were given to the buffalo for the continued subsistence. Many rituals and songs are about giving thanks to the buffalo. 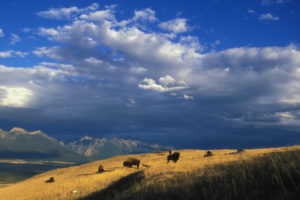 Bison mingle at the National Bison Range on one of the many beautiful vistas of the Mission Mountains (courtesy USFW Dept. of Interior).

Due to a government program that was designed to eradicate the buffalo to help defeat many Indian nations, the population of buffalo decreased to almost extinction. The Confederated Salish and Kootenai Tribes (CSKT) were one of the first tribes to take steps to foster the growth of buffalo populations. Today, the CSKT help maintain the National Bison Range a few miles from the S&K Headquarters in St. Ignatius, Montana. Yellowstone National Park also maintains buffalo herds, and per treaties with many tribes, there are still annual buffalo hunts. Our people do not hunt buffalo for sport, but rather for the subsistence of our culture.

Long ago, the Salish people would travel over the mountains to the plains area to hunt buffalo. They knew how many buffalo would provide for the tribe that year and they did not waste or overkill because their livelihood depended upon the buffalo’s return. Hunting buffalo in the plains was dangerous as many tribes fought over certain hunting lands. The buffalo was so important that the Salish braved war with neighboring tribes to obtain what they needed. Often the Salish would hunt with ally tribes, such as the Niimiipuu (Nez Perce) and the Shoshoni to fend off many enemy tribes.

Before a hunt, many bands or groups of families would solicit the assistance of a medicine man to help them find buffalo. The medicine man would fast and pray, often using ceremonial buffalo objects like skulls. The medicine man would relay messages from buffaloes of the past, often in an older form of the Ancient Salish Language, or in the language of other tribes like Blackfeet, Crow, or Sioux. The Salish believed that the spirit of the buffalo spoke in the language that it was most familiar with.

After a buffalo kill, the hunter kept the hide and harvested the cuts of the meat that he wanted. The remainder of the buffalo was given to other members of the tribe or hunting party. The hunters would skin and cut up the buffalo for transport to hunting camp where women would dry the meat for the winter months and prepare the other parts of the buffalo. Nothing was wasted, as it was taboo to disrespect the buffalo that gave its life for the People. 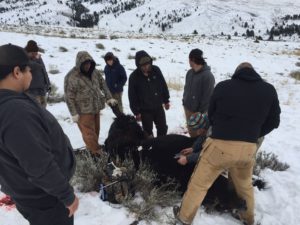 Today, the CSKT help maintain the National Bison Range in partnership with the U.S. Fish and Wildlife Service. The National Bison Range is a National Wildlife Refuge for the buffalo as well as many other species of wild animals such as antelope, deer, and mountain lion. The Bison Range is one of the oldest wildlife refuges in America and has about 18,800 acres of grazing land located a few miles from the S&K headquarters office. It also contains many great views of the entire Reservation and visitors can drive a scenic road to the top of the range with almost guaranteed sightings of buffalo, elk, deer, and even black bears.

Recently, a Salish hunting party was accompanied by a few students from Stanford University who are working on a documentary about the traditional buffalo hunt. The students were given full access to the hunt and recorded the process of hunting, skinning, and breaking down of the meat and other parts of the buffalo. The students were also given a perspective of why Indian people still hunt buffalo, which is guaranteed to the tribes by treaty with the U.S. In recent years, many organizations have protested the traditional buffalo hunts but are reminded of how non-native ancestors decimated the buffalo populations. Our tribe continues a legacy of hunting buffalo for subsistence and ceremony, not of sport. We respect the buffalo and give thanks to the buffalo that have given their lives to our people.