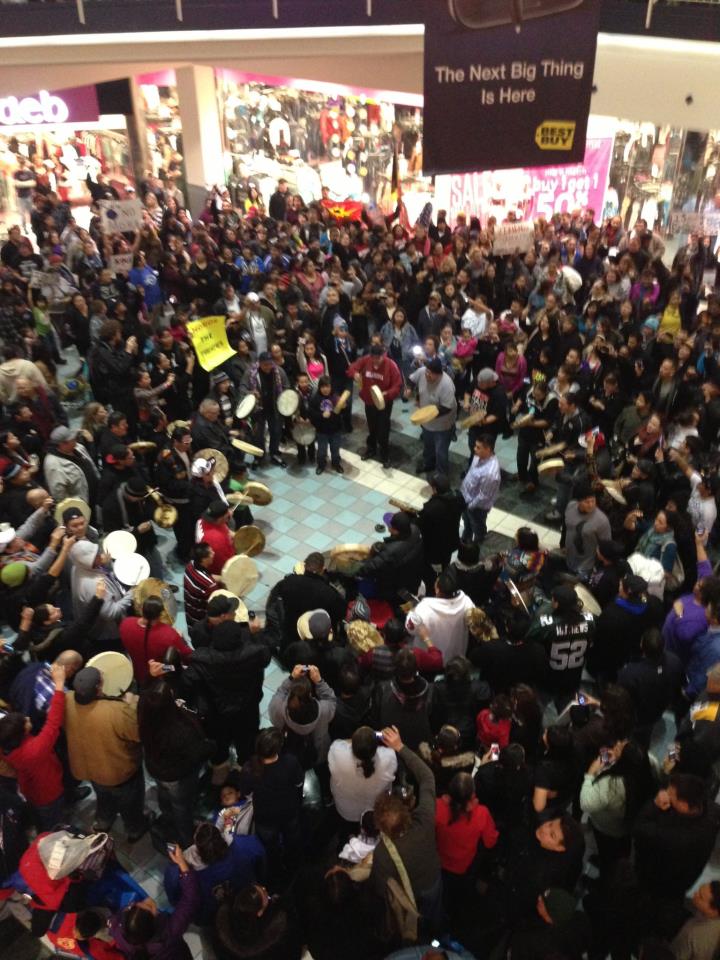 Round dancing a tribal tradition at powwows 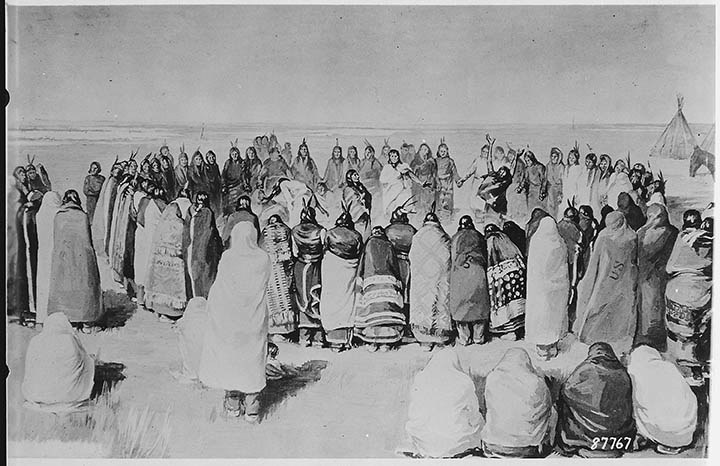 A painting of a traditional round dance courtesy of National Archives and Records Administration.

The unique buzz of hand drums give a distinct sound to round dance ceremonies. Originally started with the plains area tribes, the round dance has spread throughout Indian country and was started as a means to bring communities together, usually during winter months, to share songs and stories and to have fun. The round dance songs usually consist of love, loss, and humor. In recent times, the round dance has become a tool of community organizing and coming together for certain causes, as seen in the recent Idle No More movement.

The round dance consists of a group of hand drummers standing in the center singing songs while groups of people dance in a circular movement around the drummers. Sometimes the dancers will join hands while dancing, but depending on how many people are dancing they may not join hands. Round dances can be smaller family/friends gatherings to larger events which bring many communities together. Some round dances may consist of tens of people to thousands.

An Idle No More round dance at the Mall of American in Twin Cities, MN (photo courtesy Last Real Indians Tumblr).

Originally the round dance was to bring people together during the lonely winter months. Folks would gather to sing songs, dance, and otherwise socialize. The smaller community round dances would sometimes be sponsored by one family, who provided food to participants. After the round dance another family would sponsor the next round dance. The round dance is a way for community members to share food, stories, and song.

Recently, the round dance has been used as a way of mobilizing communities around certain issues affecting people and tribes in Indian Country. Starting in December of 2012, the Idle No More movement spread across Indian Country. Communities came together in solidarity with Canadian tribes to bring awareness to treaty issues between the tribes, the government of Canada, and the British crown. News of the Idle No More movement spread across the globe as Indian people used the round dance in a public “flash mob” style event to bring awareness.

The flash mob was a public dance, often performed in crowded areas like malls, train stations, or parks. Idle No More round dances began popping up around major US and Canadian cities including thousands of people gathering in the Saskatoon Mall, Seattle’s Southcenter Mall, and the Twin Cities Mall of America.

While Idle No More gained momentum other people around the world had their own round dances in Europe, the Middle East, and Australia; lending their support to the Indian people of Canada. While keeping with the theme of community, the Idle No More movement brought and continues to bring people together around causes that affect Indian people.

The Salish Kootenai College Student Senate recently held their first annual “Good Vibes” round dance as a way for the students and the community to come together and share positive energy. The event was held at the college event center in Pablo, MT, the headquarters of the Flathead Reservation. Food and prizes were offered to the students and community members who came to support the event. The Student Senate hopes that this event will be continued annually as a way for the students of Salish Kootenai College, many coming from tribes throughout the US and Canada, to give back to the people of the Confederated Salish and Kootenai Tribes and its many residents of the reservation.