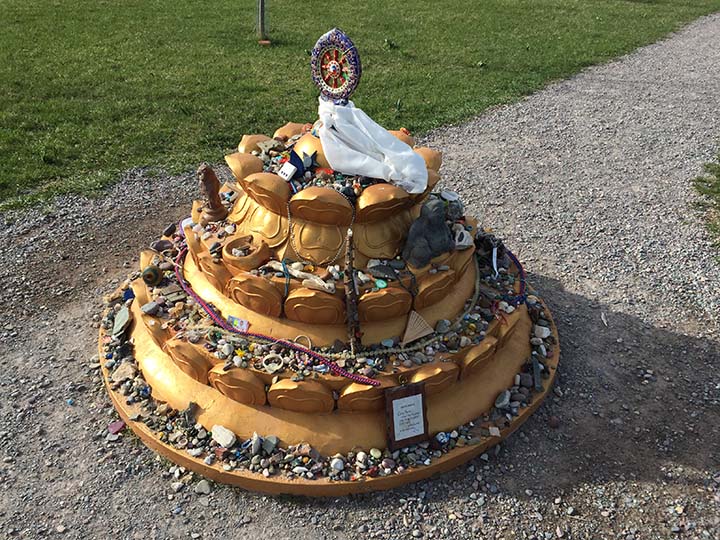 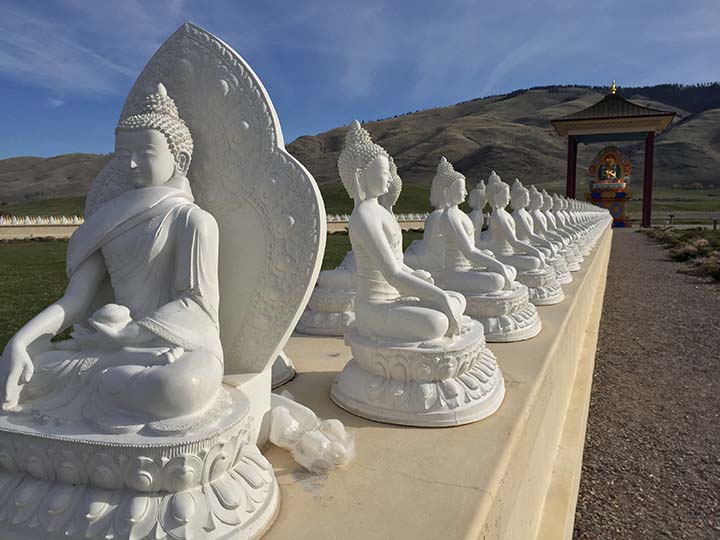 As one passes north through the town of Arlee on the Flathead Reservation in Montana, the landscape is filled with many farms and ranches owned by local residents. Just off the highway, about two miles north of Arlee, is a 60-acre piece of land that stands out from the farms and ranches. The beautiful garden layout of native trees and plants are towered by a 35-foot, colorful shrine. All around the shrine are mini-sculptures that symmetrically project outward towards a circle of more mini sculptures. The pavilion houses the largest sculpture called Yum Chenmo (in the representation of the Deity Tara), a maternal figure in Buddhist teachings. The mini statues that surround the shrine are that of Buddha. One thousand mini Buddhas to be exact, thus giving the garden the name, The Garden of One Thousand Buddhas. 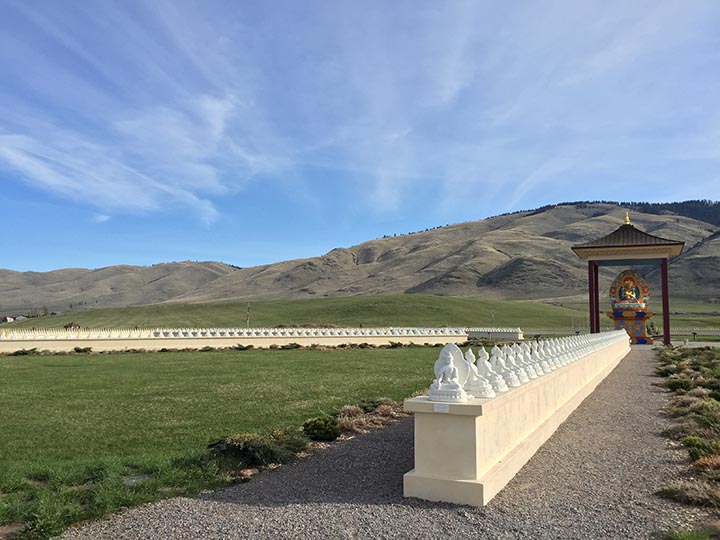 The Garden of 1000 Budhas features a large statue of Yum Chenmo, the Great Mother, at the center of a many pointed star of small Buddha statues.

Tulku Sang-Ngag Rinpoche, Tibetan master of the Nyingma School of Buddhism and the 6th incarnation of Gochen Tulku, started life learning the teachings Buddha. At the age of eight, he was captured by communist China and imprisoned for practicing Dharma. The nine years Mr. Sang-Ngag was imprisoned only strengthened his faith and he has since traveled the world to promote peace.

On his journey Mr. Sang-Ngag met Linda Pritzker, one of Forbes 400 Richest People in America and heir to the Hyatt Hotel fortune, at a Buddhist retreat in Santa Fe, NM. Linda met Mr. Sang-Ngag again in her hometown of Boulder, CO and knew that she wanted him to be her teacher. Mentioning an upcoming trip to the Mission Valley in Montana to look for a new place to live, Mr. Sang-Ngag asked if he could accompany her. They arrived in Missoula and began their trip north to the Flathead Indian Reservation. While passing through the town of Arlee, they crossed the Jocko River and came to a flat clearing, called Schall Flats. Mr. Sang-Ngag noticed the land looked like a lotus flower blooming and asked Ms. Pritzker to pull off of Highway 93 onto White Coyote Road. There was a “Land for sale” sign off the road and Pritzker and Sang-Ngag went to investigate. When they arrived at the property, Mr. Sang-Ngag recalls looking at the valley and the mountains and recognized the landscape, although never physically being there before. 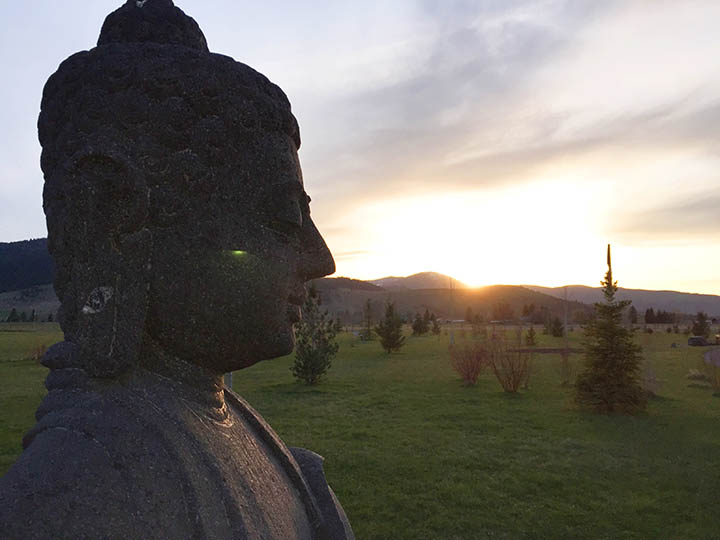 In his youth, Mr. Sang-Ngag had a vision of building a Buddhist temple at the base of a mountain and a very specific landscape. Mr. Sang-Ngag knew that, when he stood north of Arlee, that this would be the place he dreamt about and would build a temple that would promote peace in the world. Knowing the complicated history of non-Indian landownership and other religious sects buying property on the reservation, Ms. Pritzker tried to persuade Sang-Ngag to reconsider building on an Indian Reservation. Mr. Sang-Ngag had already made up his mind. An anonymous donor bought the property and the ranch house, as well as purchasing an additional house. 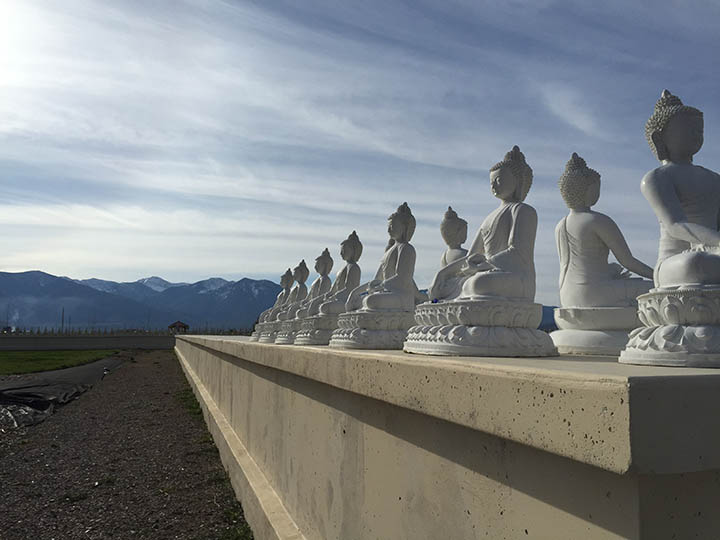 A line of small Buddhas waits to be completed.

Taking heed from Ms. Pritzker, Sang-Ngag met with the CSKT Tribal Council to gain the support of the tribe before construction began. Mr. Sang-Ngag brought traditional gifts of coffee and katags (offering scarves) to the Council, which they accepted. Mr. Sang-Ngag also cited similar histories of the Tibetan people and the Native people of North America. The Tibetans, a lot like the American Indians, faced displacement and oppression from their government. The Tibetans also burned sage and juniper as sacramental offerings during prayer and have respect for the sacredness of the land.

The Tribal Council cited concerns that the Buddhist site would draw many people to the area and possibly drive up land prices. Julie Cajune, tribal member, mentioned to New York Times, “It’s ironic but many Indian people cannot afford to buy land on their own reservation.” The concern was shared by many in the community as well, that thought the Buddhist site would draw many people to the area. Mr. Sang-Ngag met many times with Tribal officials and shared their concern for any attention the garden might bring. Most people in the community now feel more comfortable with the garden. Mr. Sang-Ngag reassured the community that the Buddhist garden is for everyone, regardless of religious affiliation and spiritual beliefs. Every spring there is a peace celebration, where tribal spiritual leaders and the Buddhist community come together and celebrate their efforts for world peace. 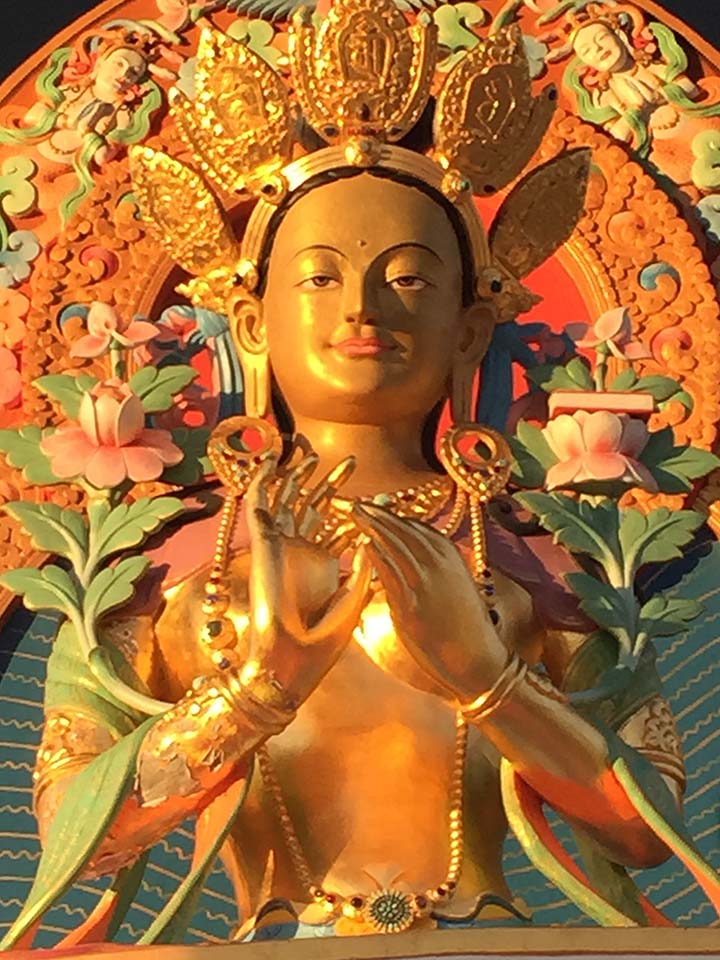 The 24-foot tall statue in the representation of Tara is called Yum Chenmo, the Great Mother. The garden itself is laid out with the statue of Yum Chenmo in the center and eight-spoke wheel symmetrically protruding outwards. The base of the statue contains destroyed weaponry to signify peace on earth. The eight-spoke wheel is in the shape of the Wheel of Dharma, which is sacred to the Buddhist teachings. Each wheel spoke and the outer circle contain the one thousand statues of Buddha, of which 900 are currently constructed. The remaining statues will eventually be built and the garden will be complete; the time table is contingent on the amount of money raised. His Holiness the 14th Dalai Lama has accepted an invitation from Mr. Sang-Ngag to visit the Garden of One Thousand Buddhas and consecrate the land once it is finished.

Visitors leave well wishes for loved ones at the Garden.